Most years by the time August rolls around we have low and fairly warm water on our coastal rivers, and this year is certainly no exception (read drought). Around this time in the estuaries some sea run cutthroat, coho, chinook, and pinks amongst others begin to push into the lower river and stage, particularly where there is sufficient depth and tidal influx of cooler water.  Sometimes fish can be fairly cagey under these conditions and slim, sparse patterns can be much more effective, than standard fare. While there are many modern saltwater patterns available for this scenario, I think I’ll focus instead on a lesser known old school pattern. The northwest version of the fish hawk is very slender, simple to tie, has just enough flash and features a skinny mobile wing. Under these conditions in the right places, think deeper undercut pools a mile or so from the ocean right down to the salty spits that make up the very end of many coastal rivers this fly can take just about anything swimming in my experience. So this year try out an older pattern that definitely hasn’t been forgotten for it’s effectiveness.

I, like many I am sure, learned about this pattern from Les Johnson’s Fly Fishing Coastal Cutthroat Trout, where he stated it was in a book of fly patterns from the 40’s in Seattle. The pattern is an old classic wet fly pattern variation tailored specifically for our pacific northwest quarry. Either the original or the variation(s) this fly are effective, check out the book and this fine pattern. 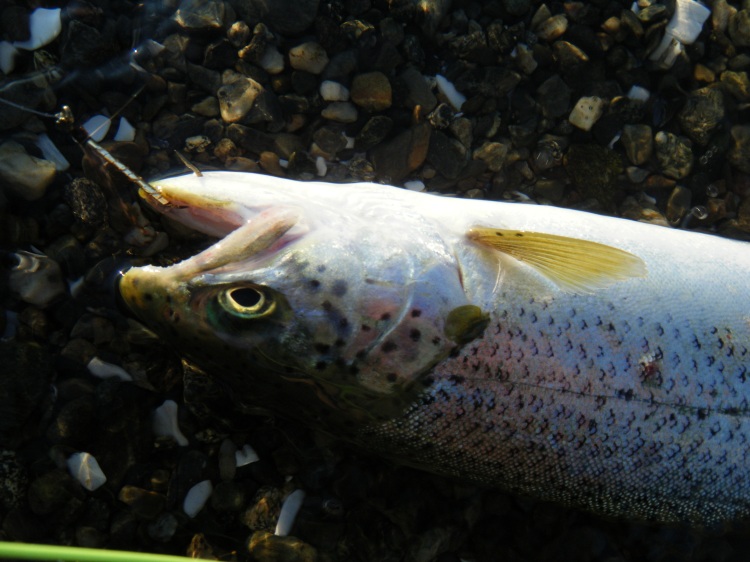 Her are a few links to pages that I could find documenting a bit of the history of the original.

Tied skinny and sparse for low, warm, and clear water, all images are of the variation not the original pattern

Below is the recipe for the Les Johnson skinny version

Body: medium gold tinsel (counter wrapping with gold oval tinsel or wire increases the durability of all tinsel bodied flies)…and we all know what sea run teeth do to flies

A number of effective variations on a variation